Okay so incase you guys don’t remember my super excited posts about getting to visit Lindsay, I went to Boston last weekend! I thought I would share this adventure with you guys through a video as well as pictures with more details! So check out the video on my YouTube channel, here’s the link: Boston I hope you like it. Feel free to subscribe since I will be posting DAILY videos over the summer. I’m going to try out the whole daily vlogging thing in addition to daily blogging, in addition to maybe two jobs if I don’t get full time at the one I already have. There’s a way to keep busy. Anyway, on we go! There’s a lot but some of them I’m really proud of so try to look at them all please!

Rain in Philadelphia from the bus. If you want to see cooler bus pictures, there’s footage in the video. They liked to keep the lights on, don’t worry I’ll have a Megabus review later this week. For the parts of the journey that I was awake it was very nice drive in which I enjoyed Camp Takota.

Waiting for the Subway, it literally took forever. I’m exhausted, I had gotten off the bus at 4:50, picked up my bag, found a bathroom and had to try and find my way to find the subway, let me tell you this was not easy. It was even harder when I got off and I had to think, left or right, so I went right. Wrong way. I walked a few blocks before I decided to turn around and as my luck goes if I would’ve gone left I would’ve walked around a sign thing and there would’ve been Starbucks.

So this sunrise started at about 6:45 after being in Starbucks for like 45 minutes I at least got to see the beauty of the city. This Harvard Square by the way, that’s where the shuttle from Lindsay’s school and picks up/drops off. 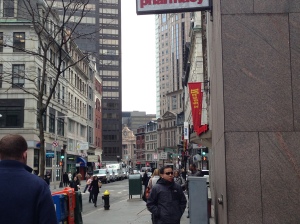 After going back to her room for a little to drop off my stuff and relax and rest we went out for lunch to Quincy Market for lunch where I got cheese pizza.The guys across from us were disgusting.

Lindsay told me what this was but I already don’t remember. Sorry pal. But it looks really cool. Maybe it was the first courthouse in Boston, but don’t quote me on that!

This was taken on our two mile walk to Brandy Mellville to get free sticker. I’m all about free. This is a row of houses that faces a park. 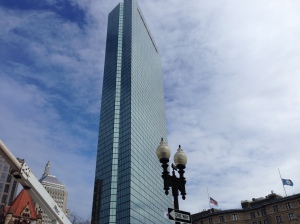 This was a cool building. Lindsay told me to take the picture and then called me a tourist, which I was, but she was being rude. Rude, rude, rude.  But ooo look pretty, also it’s not warm like picture makes it seem, it was very cold. 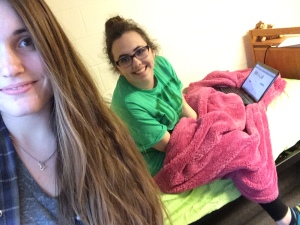 It was cold in Lindsay’s room but we both did our makeup so she wanted to take selfies. 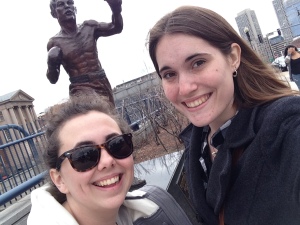 This is a boxer, who’s name I don’t remember. Over break we were supposed to take selfies with statues but we ran out of time, so we did it in Boston. Admire my new prescription sunglasses, I can now see in the sun without squinting. 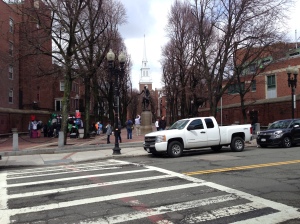 There’s the North Church and you can kinda see Paul Revere. We were going to walk the freedom trail but we decided not to.

Well we tried to take a picture with Paul Revere and his horse, but instead I accidently cut off his head.

This is a picture of the Harbor and there was a park around here. We stumbled upon it while exploring, it was very pretty. 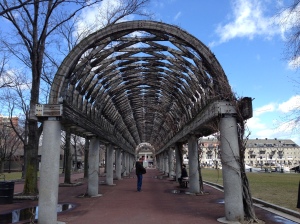 This was an archway that looked pretty. Look how blue the sky was it was so beautiful. I wish those people weren’t there though, they ruined the picture.

Well the panorama picture didn’t work out the way I wanted it to, but it’s still a cool picture of the water. This was our last adventure of the whole trip, how sad. 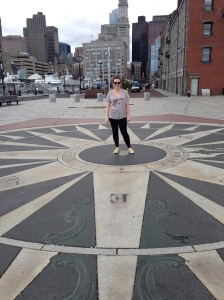 Here I am with the city in the back ooo lala. I’m wearing my Jawbreaking shirt that I won from their Instagram contest which is super cool. I just really like this picture too.

Just another scenic picture of the city.

We found this sandwich place and it was so good. Chicken pesto with mozzarella, was so delicious. Yum, yum, yum. 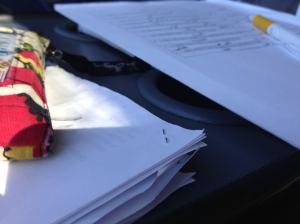 I got a whole table to myself until New Jersey on the bus and it was so lovely to be able to spread all of my stuff out.

Okay sorry this wasn’t very detailed. There’s only so much you can say when you’re looking at a picture. I’m so glad I got to go visit my best pal. Thanks Lindsay! Thanks for reading everyone!

One thought on “Average Adventure: Boston”