I’m 20 which means that this Christmas will be my 20th (I’m great at math) so I thought, why not share with you some pictures from a few of those 20 Christmases. In case you were wondering tomorrow will be Christmas present and then it will be Christmas future. I think it’s creative. 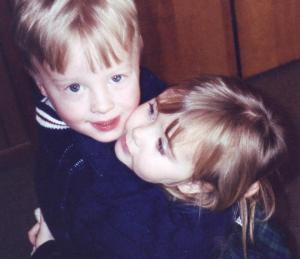 I would say this is the oldest Christmas picture I have on my computer from what I’m assuming is Christmas since we’re both dressed up. This is my cousin Chris and I probably when he was about 3 or 4 and I was about 2 or 3.

This is more recent but not too recent. My guess would be that I was probably in the third or fourth grade here. Julia looks pretty little so I’m guessing it was before she was in school. I would guess that Sarah would be in Kindergarten or first grade, I could be very wrong though. We used this as a Christmas card one year. 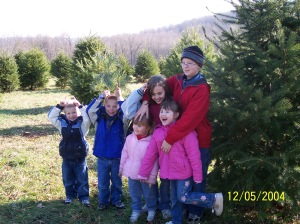 This is very old because I don’t think that any of the other kids would have been in school except for Chris and I , the tallest ones in the picture. I just saw the date which would mean that I was in the fourth grade so Sarah and Sean would have been in first and Chris in fifth. The order is Aaron, Sean, Me, Chris, then Julia in front and Sarah next to her. This is when we went to cut down Christmas trees. All of our families still use live Christmas trees which I think is pretty cool.

This is my best friend Hannah and I after our fourth grade Christmas musical. She was a mouse and I was a grandmother. I could still be a grandmother with the exception of no grandchildren and no grey hairs.

This is all of my cousins, minus Chloe who was yet to be born, my guess I was probably in the fifth grade. My dad’s side of the family always celebrates Christmas Eve together with dinner and presents. Chris and I are the chairs, then Sarah, Sean, Julia, Aaron, and Jonathan laying in the front.

This is Christmas morning one year, not sure which. I don’t know if you guys remember Floam, but it was a really big deal one Christmas, like one of those fad presents and my Poppop got it for us so we of course had to play with it right away. I am the very excited one standing up, then Julia, and Sarah is just in frame. We are all very happy about the sticky substance. The second picture is Julia and I opening our stockings. My mom crossed stitched us each a stocking.

This is very recently because I still wear that sweatshirt. I think it was probably senior year, maybe junior based on the fact that I got a Harry Potter travel mug and that would have been right after we went to Harry Potter World. I look very unamused at the fact that it’s morning. This was my sleeping stage, as well as my KNEX stage which you  can see featured in the background. 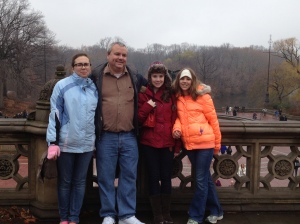 This was when we went to NYC one year at Christmastime. I’m honestly not sure what year, I think senior based on my glasses. The first picture it’s me, my dad, Sarah, then Julia, the second picture is me, Julia, then Sarah, and then the last picture was a different year, and it’s Sarah, me, then Julia. We aren’t going to go at Christmas time again.  I think it’s one of those things everyone should see and then be like “Okay, I’m good now.” 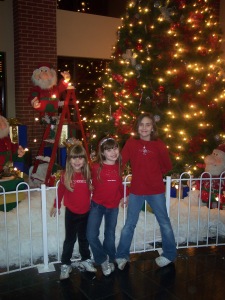 This is at Hershey park when I was in 5th. The first picture is Julia, Sarah, me, this is in the time where people would ask if they were twins and Sarah would get really upset because they’re three and a half years apart. The second picture it’s me, Julia, Santa, Sarah.

This is just a random assortment of various other pictures from the Christmasy times of my past. Merry Christmas Eve Eve everyone!

2 responses to “Christmas Past”